The MLBA has announced that the date for the 2022 MLBA Annual Golf Outing will be Wednesday, July 13th at Dahlgreen Golf Course (4 miles west of Chaska off Hwy 212.)

Click here for a registration form for a foursome.

It was a perfect day for golf with cool temps in the upper 60’s and a light breeze. 35 teams (140 golfers) competed in the annual “Scramble” tournament with Team Southern Glazers W&S MN coming out on top with a score of 15 under par (57). Second place went to Stick’s Tavern & Grill with 12 under par 60, while third place was tied at 61 by Breakthru Beverage and Team Arctic Glacier/Viking Liquor. A special “Grand Prize” was awarded to the first team that handed in a score of 32 on the front nine (in honor of the 32nd annual MLBA Golf Outing).

Each golfer got a goodie bag with great items like logo golf balls, microfibre golf towels, can coozies, shirts and 50ml samplers. Then they were treated to lunch before the event or “at the turn.” Every tee box had a representative on it with adult beverages to sample or prizes to hand out. There were contests for Longest Drive (men and women), Longest Putt and Closest to the Pin. Please see photos above and the list below for all the great sponsors that make this MLBA event truly memorable. We alread look forward to next July for the 33rd MLBA Golf Outing! 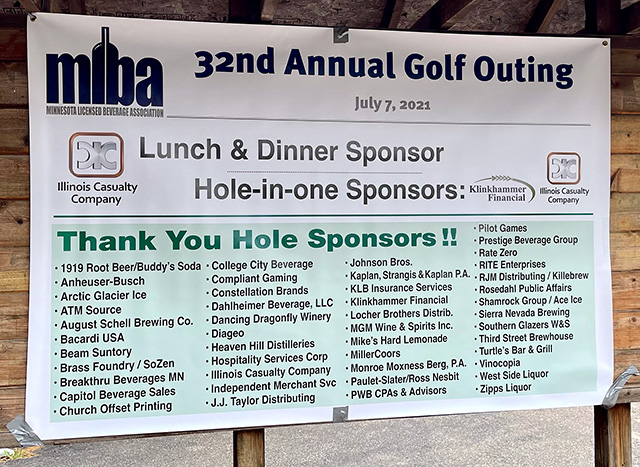 Thanks to ALL our Great Sponsors!!